Taraweeh, Qiyam Ramadan, Qiyam Al-Layl, Tahajjud, Witr – these are all names for the same prayer, a great Sunnah Mu’akkadah (during and outside of Ramadan).

The Prophet (ﷺ) said about the great virtue of Qiyam Al-Layl during Ramadan:

Abu Hurairah (Radia-Allaahu ’anhu) narrated that the Messenger of Allaah (ﷺ) said: “Whoever prays Qiyam during Ramadan out of faith and in the hope of reward, he will be forgiven his previous sins.” [Sunan An-Nasa’i no. 1602]

Some benefits and virtues of Qiyam Al-Layl:

Qiyam Al-Layl is a sublime act of worship which Allaah loves, and a means of getting nearer to Allaah. It is a divine Shari’ah, a Sunnah of the Prophet (ﷺ) and a praiseworthy characteristic of a true believer.

Many people have forgotten about this great act of worship except during Ramadan; some don’t even perform it during Ramadan. If you attain Qiyam Al-Layl you have attained an abundant reward from Allaah; a huge success and a great bounty.

How many times has Allaah mentioned Qiyam Al-Layl in the Qur’an? How much goodness is aligned with it? How many promises are made to those who perform the night prayer? How much happiness is affixed to this act of worship?

One has to be diligent and strive hard to achieve this deed, not only during Ramadan, but also throughout the year.

1. Establishing the night prayer is one of the descriptions of a true believer, whom Allaah praises in Surah As-Sajdah. END_OF_DOCUMENT_TOKEN_TO_BE_REPLACED 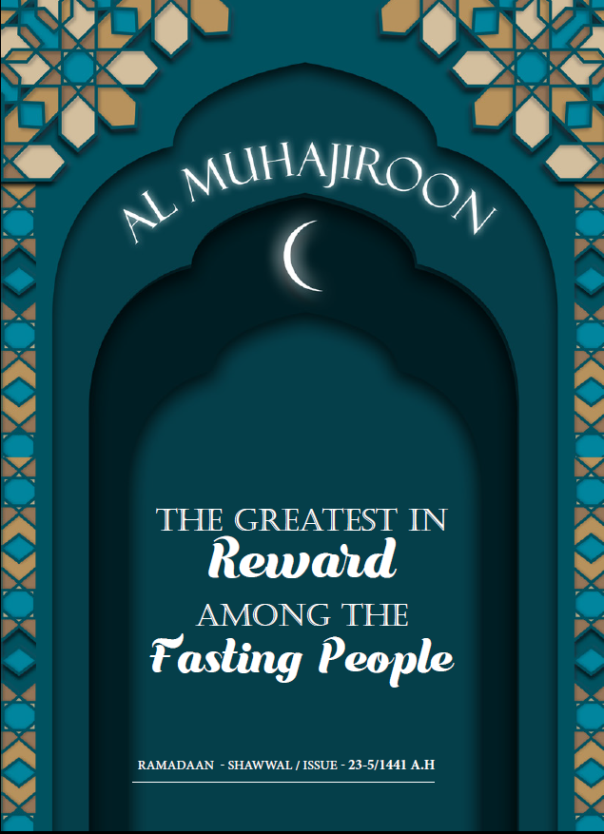 Posted in Our Bi-Monthly Magazine - Al Muhajiroon, Our Publications

فرح (joy) is an act of worship, an عبادة, which the believers should feel when they break their fast.

For what reason is the believer happy?

Shaikh Ibn ‘Uthaimeen (رحمه الله) said that when he breaks his fast, his pleasure is from two aspects:

1) That he has carried out the command of Allaah and successfully completed the obligation enjoined upon him by Allaah. How many people are in the graveyard wishing to fast for just one day for the sake of Allaah and yet he is unable to! The believer is happy that Allaah bestowed this favor upon him; that He guided him to complete the fast of that day. This is an important act of worship that one should practice at the time of breaking his fast.

2) Also, he feels joyful because Allaah has made lawful for him what conforms with his nature of food, drinks, and sexual relations with his spouse, after they were forbidden for him.

Ponder over the moments of joy in your life. When are you happy? END_OF_DOCUMENT_TOKEN_TO_BE_REPLACED

One of the greatest blessings of Allah upon us is that Allah teaches us about His Noble Self. He chooses from among His servants and teaches them about Himself.

It was narrated from bu Moosa al-Ash’ari that the Messenger of Allah (ﷺ) said: “Allaah looks down on the night of the fifteenth of Sha’ban and forgives all his creation except a mushrik or one who harbors hatred against the Muslims.” [Ibn Maajah, 1390]

مشرك Mushrik = The one who associates partners with Allah in worship

مشاحن Mushahin = The one who holds grudges in his heart

If we believe with certainty that this happens, then it should motivate us to take action. This is a warning for us to clear our hearts of hatred, malice, and grudges against other Muslims.
END_OF_DOCUMENT_TOKEN_TO_BE_REPLACED

We praise Allah abundantly for allowing us to reach the month of Sha’ban; a month which most people do not pay attention to.

Usamah bin Zaid (Radia-Allahu ‘anhu) said: “I said: ‘O Messenger of Allah, I do not see you fasting any month as much as Sha’ban.’ He said: ‘That is a month to which people do not pay much attention, between Rajab and Ramadan. It is a month in which the deeds are taken up to the Lord of the worlds, and I like that my deeds be taken up when I am fasting.“‘ [An-Nasaa’i]

One of the greatest blessings of the gatherings of remembrance of Allah is that the Angels look for them. When they find such gatherings, they come and sit with its people. And when the gatherings have concluded, it will be said to those people, “Get up while your sins are forgiven.”

This only happens in the gatherings of religious knowledge.

Allah swore in the Qur’an, in Surat Ibrahim [14:7], that if you are grateful, He will increase you:

“And (remember) when your Lord proclaimed: “If you give thanks (by accepting Faith and worshipping none but Allah), I will give you more (of My Blessings), but if you are thankless (i.e. disbelievers), verily! My Punishment is indeed severe.” END_OF_DOCUMENT_TOKEN_TO_BE_REPLACED